About The Jazz Quartet

Our Jazz Quartet promises a variety of jazz genres beloved by Filipino jazz enthusiasts and jazz lovers alike. They are extremely talented in playing jazz subgenres such as standards, original, R&B, and fusion. Highly enthusiastic and entertaining, the group is perfect for galas, dinner reception, corporate functions, and other private events that need live music and entertainment. The Los Angeles-based group is led by multi-awarded musical director-composer Winston Raval and features Charmaine Clamor with vocalists Eric Baul and Trina Marana.

Winston Raval was bestowed by the Mannuunuri ng Pelikulang Pilipino with the first Natatanging Gawad Urian in 2018 title to a film scorer. “Raval introduced a new musical idiom to Philippine Cinema,” says MPP. He also received a life-time achievement award from both the San Francisco Filipino-American Jazz Festival and the L.A. based JazzPhil-USA in recognition of his artistry and contribution to Filipino Jazz.

Celebrated by The New York Times as “a gifted vocalist” and by Los Angeles Times as “one of the important and original new jazz singer of the decade,” Filipino-American recording artist and cultural trailblazer Charmaine Clamore has earned her Queen of Jazzipino crown. With three consecutive albums in the Jazz Week World Music Top-20, she simultaneously made Top-5 on both the World and Traditional Jazz radio charts.

Eric Baul is a Los Angeles based baritone who loves to “Jazz mez around.” His repertoire includes an intoxicating concoction of jazz standards and jazzed-up popular and R&B tunes. He has been performing in the L.A. scene for the past decade at venues that include the world famous Catalina Jazz Club and Gardenia Supper Club to name a few.

With roots in soul, R&B and jazz, Trina Marana, a Los Angeles based artist released her debut album in 2015 titled Straight Ahead together with Winston Raval and Eric Baul. She uses her music to help the less fortunate children of the Philippines. She is also being recognized by the Maxx Promo’s as Best Jazz Artist for 2019.

Our Jazz Quartet's past performances

Booking Jazz Quartet from Ocdamia Music Group, LLC. grants you access to our team of 100+ professional musicians, attentive customer service and expert advice from our friendly staff 24/7, and most importantly, our customer guarantee.

What instruments are in a jazz quartet?

There can be a variety of instruments in a jazz quartet, but our local jazz quartet band for hire includes a pianist, 2 singers, and an instrumentalist such as a violinist or double bassist. Our jazz quartet specializes in standard jazz and jazz fusion music.

Do we need to provide our own songs for company product launching event?

Our live jazz band quartet can play a wide repertoire of music but we welcome music requests for specials events such as product launches. If there is a theme and a specific musical piece for the product launch event, please let us know in advance so our musicians can learn the piece.

What we should prepare for office party?

An office party is a fun and exciting event. To create an exciting and fun party for your company, we recommend that you prepare good food, a great venue, and of course live music from OMG! We recommend our jazz band for hire for these events. With their talent and years of experience performing for events, your guests will definitely have a wonderful time!

What do your musicians wear to a Christmas party?

Our musicians are often dressed in a formal all-black attire for events. However, if you would like them to dress according to a certain theme, let us know and our musicians will gladly accommodate your request.

Other Jazz Bands nearby 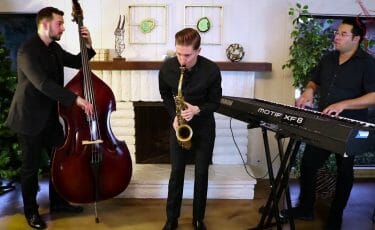 Get your guests swinging and swaying with our amazing jazz trio!
5.0 1 Rating
Jazz Bands
Orange County